Perendales are a relatively new breed – registered in 1960.  They were developed right here in New Zealand by Sir Geoffrey Peren of Massey University during the 1940s and 1950s.

They were developed from a cross of Cheviot and Romney to produce a tough hill country sheep that produces great wool.   This was particularly important after the World War II when many returning servicemen were balloted tough hill country blocks to break in for farming.

Here at Te Toko they are the perfect sheep for the steep to overhanging hill country – they are active and hardy – often right at the top of the hills – especially when Kim wants to bring them in for shearing!

The micron ranges from 29 micron in the lamb’s wool up to 36 microns.  On lowland grasslands sheep will produce up to 5 kilograms of wool a year of 10 to 15 centimetres length.

On hill country the wool clip is around 3.5 kilograms with two shears a year being common – so the length for each shear is generally 5 to 7.5 centimetres.

Ewes weight between 55 and 70 kilograms and rams up to 90 kilograms.

They are a dual purpose sheep producing both long low lustre high bulk wool and also good growth for meat.
In 1980 there were over 11 million Perendale sheep in New Zealand but since the decline of wool these numbers have dropped back to 3.1 million and represent about 9% of the New Zealand flock. 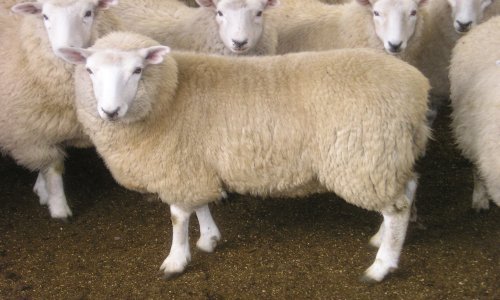 The picture to the right is Kim's ideal perendale - it is one of his ewe hoggets.  He says he selects his rams by going into the pen, then making a lot of noise.  He selects the rams which jump out of the pen.  I can attest to this having helped him move them through the yards - they are true escape artists and can clear a fence at head height!

Janette lives at Te Toko Station which is one of our current yarn producing farms. Before this Janette had her own 12 acres in West Melton Christchurch where she began the process of growing her own special breed of sheep. Initally she brought arapawa sheep with which she crossed pit island and border leister to create the strength needed in the arapawa wool. She now has 50 plus sheep and a Corriedale ram. This wool is not yet available in yarn but can be bought fully washed and carded ready for spinning and felting.  Shop online now.

Janette also took her Llamas to the farm with her. She has a healthy 17 Llamas with which to farm. New Years day has become the traditional shearing day with Kim helping out giving the animals crazy haircuts in the farms cattle crush. Sorry the llama fibre is not yet available for sale.